The rise of transphobia in the UK: Where did it come from?

Back a while ago I interviewed by What The Trans!? and was asked where I thought this transphobia had come from and my reply was that it’s always been there in the UK because an awful lot of bigotry has always been here in the UK and routinely ignored because we’re constantly fed a lie that is not what we’re like as a country

But the reality is that the UK is a hostile place to live if you don’t tick all the right boxes. The UK is riven by class and socioeconomic divisions, as well as divisions based around every kind of separator you can think of

I suppose the closest I could describe the UK would be as if the almost all of the majority white, cis-het population (which is the vast majority of the population) never grew past the school playground; desperately clinging to cliques and looking down on others or hating them for being ‘unworthy’ because it gets to make them feel “special”

All of us who are marginalised see it all the time. Because I’m disabled I’ve been made to feel like an underclass citizen ever since I first went into hospital and it’s been made worse and worse by successive governments who have labeled me as being a ‘shirker’, a ‘grifter’, a ‘parasite’. And this has been allowed to happen because this is how the abled population want to think about and see disabled people. We have a culture in this country stretching back centuries that sees the disabled as a burden and drain on society, as an eyesore that needs to be locked away

Likewise we see it around all trans issues. There isn’t a trans person in the UK today who doesn’t feel the pressure to shut up, be invisible, to conform to what cis people demand we must be

Right now we live in a country and a society that is only willing to accept us if we pretend to be cis; if we go back into the closest and never reveal that we’re trans

A transmasculine gender-nonconforming person and transfeminine non-binary person lounging on a bed together — Image from Gender Photos at Vice (CC BY 4.0)

We live in a society that says it’s okay to be trans; just not where anybody else can see

And we now live in a society where a few token trans people are wheeled out by our oppressors to tell us that the discrimination we face every day is our own fault; that if we stopped being trans, if we stopped existing whilst visibly being trans, if we give up our culture and very identity and just try to appear to be Every Cis Person then we would never face discrimination

I doubt there’s a marginalised community out there that hasn’t seen this phenomenon in action. I’ve seen it play out in so many communities, including black communities in the US where there was an incredibly concerted push to try and eradicate African American culture; where the racism that black people experienced was blamed on black people being themselves and if black people ‘just acted like white people’ then racism would disappear

In the UK we live in a society riven by division. Too many people constantly look to punch down on others because it makes them feel better to lash out; to hurt; to crush anything different from themselves

Almost none of the bigotry that runs like veins through the UK has ever been tackled. Racism leads to tragedy but most of the time is simply not noticed. Only the most egregious of cases are ever noticed by the majority of society and then generally only when it affects white people. And along come the inevitable enquiries and ‘lessons have been learnt’, and then things are hastily swept back under the carpet and nothing changes

This is true of transphobia as well. Transphobia has always been alive and well in the UK. It is the permitted and socially acceptable form of bigotry in the UK alongside ableism. We were always the target of the gutter press; we were always the sensationalist headline that would paint us as ‘freaks’, and ‘dangerous’, and ‘predators’

The suicide of Lucy Meadows was — for a moment — a turning point. Except that it wasn’t. The reality is that Lucy’s death wouldn’t have changed a thing if it wasn’t for the fact that the press was caught not long after targeting the powerful in a way the powerful didn’t like. And so the inevitable enquiry was launched and in amongst all the evidence given of how dreadful the press were for trespassing into the lives of the privileged Lucy’s death was wheeled out to provide cover for the powerful to justify the enquiry

For a couple of years the press played along. But it didn’t last. They knew the score. As long as they didn’t obviously f*ck with the powerful then they could go back to their old ways. And so they did. They went back to treating trans people like punching bags; went back to treating us as convenient targets whenever there was a slow news day, or whenever or journalist or one of their chummies had an axe to grind, or whenever that particular section of the press needed a convenient distraction from news it wanted buried 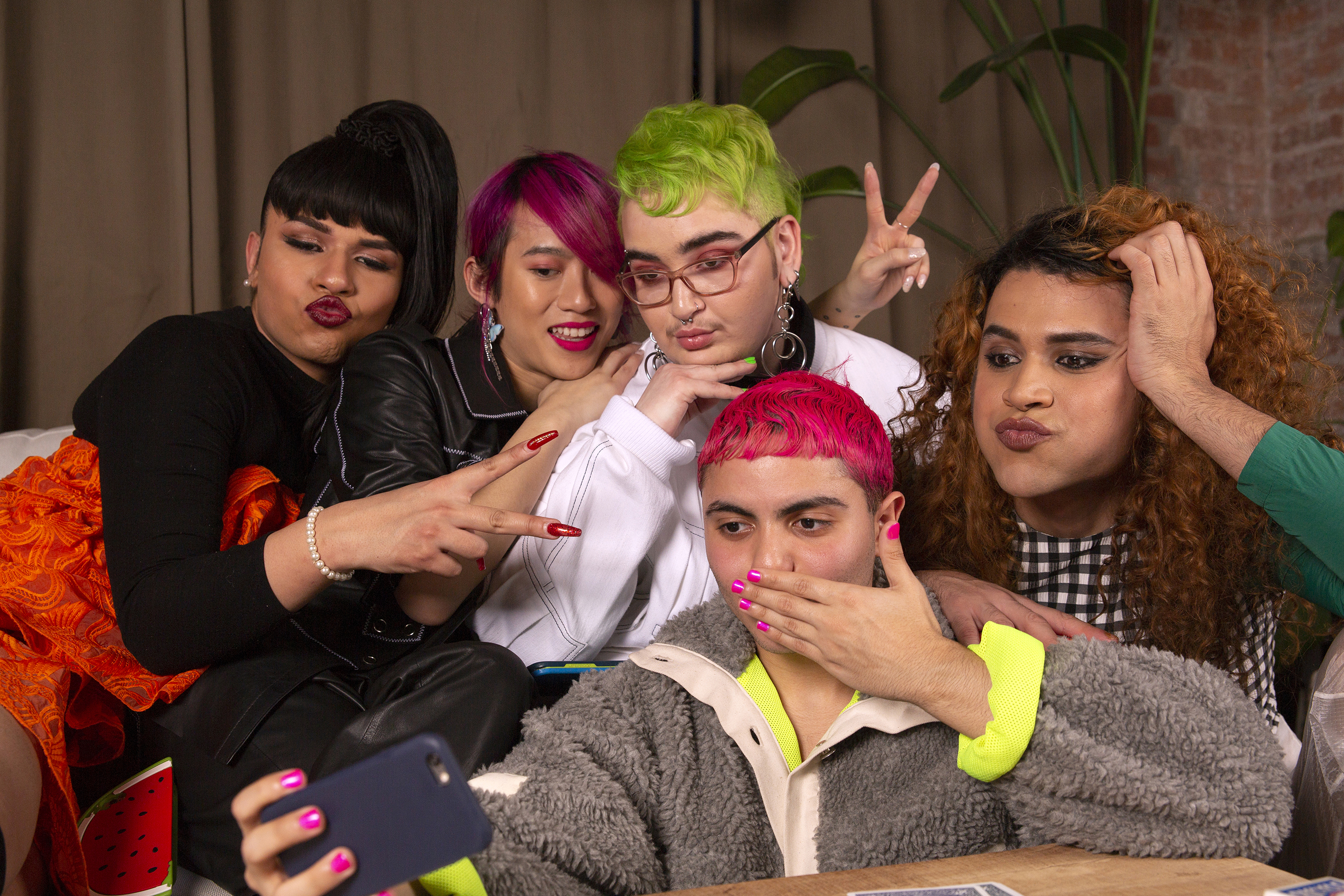 A group of friends of varying genders taking group selfie — Image from Gender Photos at Vice (CC BY 4.0)

Transphobia hasn’t ‘risen’ in the UK. It’s always been there. It’s just become more public because society considers it acceptable. Society doesn’t see it as bigotry because society doesn’t see trans people as being equals or normal. We’re the easy targets; the ones who have brought it on ourselves because we ‘chose to be trans’ and our visibility challenges the bigotry of a population that has gotten away with punching down on us unchallenged

I’d like to say that things are different now but the reality is that it isn’t. We’re still acceptable targets. Governments occasionally notice and say ‘Oh dear, that shouldn’t be happening, it’s A Bad Thing’ and then go back to — at best — ignoring us, but more likely to go back to joining in

My answer is that there has been no rise. All we’re seeing now is it becoming even more publicly acceptable than it was before. And everytime we try to challenge it?

A pet trans person is wheeled out to explain to us that if we stopped challenging cis-led transphobia then there wouldn’t be any transphobia. That if we stopped being ourselves and instead pretended to be cis there’d be no transphobia even as these pets and their handlers desperately try to hide that what they’re demanding is transphobia in itself

It is an argument that demands not that we pretend to be something we’re not to stop transphobia, but rather that we accept that transphobia is normal and therefore can’t be transphobia

We’ve all seen it; we’ve all seen the arguments that say ‘oh, I’m not transphobic but…’ followed by a statement saying that their own bigoted behaviour is perfectly acceptable and wouldn’t be hatred and bigotry if we just accepted it

There is no rise of transphobia in the UK

But there is an ever increasing demand that trans people in the UK just accept it; that we stop challenging this behaviour and pointing out how it’s transphobic and instead just accept it as being normal

It’s about stripping away our power and our autonomy

It really is that simple. It’s abuse. TERFs and other transphobes are abusers, pure and simple. This is where their demand comes from that we must remain silent and must comply with our own abuse

Because that is how every abuser works

There has been no rise of transphobia in the UK; it’s just that our abusers feel more comfortable about being more public in their abuse of us

First published on Medium, 27th May 2020. All Rights Reserved